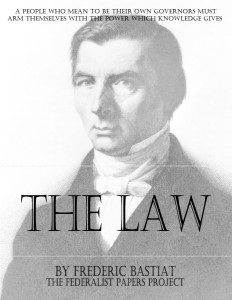 Anyone building a personal library of liberty must include in it a copy of Frédéric Bastiat’s classic essay, “The Law.” First published in 1850 by the great French economist and journalist, it is as clear a statement as has ever been made of the original American ideal of government, as proclaimed in the Declaration of Independence, that the main purpose of any government is the protection of the lives, liberties, and property of its citizens.

Bastiat believed that all human beings possessed the God-given, natural rights of “individuality, liberty, property.” “This is man,” he wrote. These “three gifts from God precede all human legislation.” But even in his time—writing in the late 1840s—Bastiat was alarmed over how the law had been “perverted” into an instrument of what he called legal plunder.

Far from protecting individual rights, the law was increasingly used to deprive one group of citizens of those rights for the benefit of another group, and especially for the benefit of the state itself. He condemned the legal plunder of protectionist tariffs, government subsidies of all kinds, progressive taxation, public schools, government “jobs” programs, minimum wage laws, welfare, usury laws, and more. 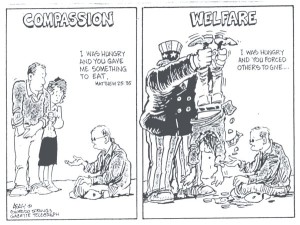 Bastiat’s warnings of the dire effects of legal plunder are as relevant today as they were the day he first issued them. The system of legal plunder (which many now celebrate as “democracy”) will erase from everyone’s conscience, he wrote, the distinction between justice and injustice.

The plundered classes will eventually figure out how to enter the political game and plunder their fellow man. Legislation will never be guided by any principles of justice, but only by brute political force.

The great French champion of liberty also forecast the corruption of education by the state. Those who held “government-endowed teaching positions,” he wrote, would rarely criticize legal plunder lest their government endowments be ended.

The system of legal plunder would also greatly exaggerate the importance of politics in society. That would be a most unhealthy development as it would encourage even more citizens to seek to improve their own well-being not by producing goods and services for the marketplace but by plundering their fellow citizens through politics. Bastiat was also wise enough to anticipate what modern economists call “rent seeking” and “rent avoidance” behavior.

These two clumsy phrases refer, respectively, to the phenomena of lobbying for political favors (legal plunder), and of engaging in political activity directed at protecting oneself from being the victim of plunder seekers. (For example, the steel manufacturing industry lobbies for high tariffs on steel, whereas steel-using industries, like the automobile industry, can be expected to lobby against high tariffs on steel).

It is remarkable, in reading “The Law,” how perfectly accurate Bastiat was in describing the statists of his day which, it turns out, were not much different from the statists of today or any other day. The French “socialists” of Bastiat’s day espoused doctrines that perverted charity, education, and morals, for one thing. True charity does not begin with the robbery of taxation, he pointed out.

Government schooling is inevitably an exercise in statist brainwashing, not genuine education; and it is hardly “moral” for a large gang (government) to (legally) rob one segment of the population, keep most of the loot, and share a little of it with various “needy” individuals. Socialists want “to play God,” Bastiat observed, anticipating all the future tyrants and despots of the world who would try to remake the world in their image, whether that image would be communism, fascism, the “glorious union,” or “global democracy.”

In the latter pages of “The Law” Bastiat offers the sage advice that what was really needed was “a science of economics” that would explain the harmony (or lack thereof) of a free society (as opposed to socialism). He made a major contribution to this end himself with the publication of his book, Economic Harmonies, which can be construed as a precursor to the modern literature of the Austrian School of economics.

This summary was written by Thomas James DiLorenzo who is an American economics professor at Loyola University.

The Diary Of An Avid Reader

Okay, so you know that we teach the Great Books, and that we have long classroom discussions, and that we... read more

In my 2019 book AMERICAN:Killing the American Dream, I stated on page 210, that the national debt was at least... read more

What is Your Political Philosophy? Part One

Liberal or Conservative, Republican or Democrat, Social Liberal or Classical Liberal, Libertarian or Anarchist? What political philosophy do you follow... read more

If you have ever considered attending Monticello College, TAKE A LOOK at what we are doing.   The following is a list of... read more

The Dark Age of Education

By Andrew Palmer - May 2020 This essay is part of a student essay series showcasing student work. The average college or... read more