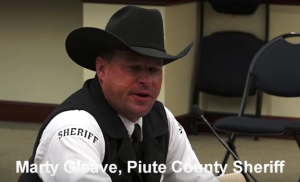 A Utah sheriff has put out the word that he will not allow his county to be overrun by the unconstitutional Bureau of Land Management and the US Forest Service, and has gone so far as to warn the BLM that he will “deputize every man, woman and child in the county to stop what’s going on,” Sheriff Gleave concluded.
He further stated that he would, “deputize everyone and arrest all federal agents” should they enter his county in a similar manner to that of those in Nevada and Oregon.
Sheriff Marty Gleave has been serving the county as sheriff for nearly 25 years. According to Gleave, all he has seen is that things “get progressively worse and worse and worse with the so-called land police.”
Gleave serves Piute County, which is the second smallest county by population in Utah. However, following the protests in Oregon, the arrests of many protesters at Bundy Ranch, including Cliven Bundy and the murder of LaVoy Finicum, Gleave determined to take a stand when he addressed the Rural Caucus of the Utah State legislature on February 12, 2016.

In our current culture failure means: lack of success; an unsuccessful person, enterprise, or thing. But that is a narrow and... read more

A Thomas Jefferson Education: More Important Today Than When Written in 2001 – Part One

I first met Oliver DeMille in 1990. I was helping to run a youth program called Youth For America (we... read more

Booker T. Washington was nine years old when he was freed from slavery. His book "Up From Slavery," gives great... read more