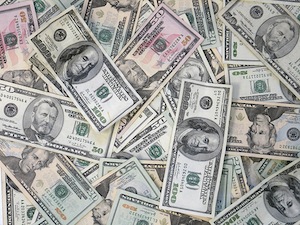 We want it all: the big house, the fast car, the sleek boat, the vacations, the exotic hunting camps, lots of money, fancy clothes. You know what I mean.
And we can have it all, if we are willing to do what it takes to have those things.
The farmer generally has a good year if he plants the right way, cares for his crops the right way and harvests the right way. If he does everything that must be done, (if he follows the rules or laws of the harvest) there is a good chance that more than half of the time, things will turn out in his favor and he can have what he wants.
If I have a great house, it will only stay that way as long I keep up on maintenance and repairs on a regular schedule. The same goes for anything else I do. If my team wants to win, we must practice hard and work together and give it all that we have to give. We will usually win a good number of games and feel good about it.
So what am I driving at? Read the following words very carefully:

We hold these truths to be self-evident, that all men are created equal, that they are endowed by their Creator with certain unalienable Rights, that among these are Life, Liberty and the pursuit of Happiness. — That to secure these rights, Governments are instituted among Men, deriving their just powers from the consent of the governed, . . .

These words were penned more than 230 years ago. Few American citizens know where these words come from so they don’t mean much to us today — but they should.

The Natural Laws of Freedom

In the same way that a farmer gets a good crop from following the natural laws of farming, history tells us that we can only keep our freedom (which is required to have the luxury to do whatever we want) if we follow the natural laws or rules of freedom.
So what are the rules of freedom? And why am I writing an article about something that we already have and have had for over 200 years?
In just the same way that a house will continue to stand for a long time even without proper maintenance, but its life will be shortened considerable if the rules of good house keeping are not followed, our liberty, though it seems strong at the moment, requires a certain kind of maintenance or it will crack and eventually fall. 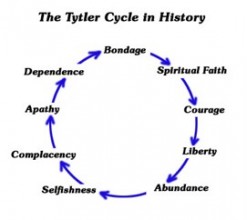 Allow me to introduce you to a well-known historian of his day who talked about the rules of freedom and what happens when we don’t follow them.
Right around the time the original 13 colonies created our national constitution, in the year 1787, a Professor of History at the University of Edinburgh, Scotland by the name of Alexander Fraser Tytler, also known as Lord Woodhouselee, gave a lecture about the fall of the Athenian Republic some 2,000 years earlier:

“A Democracy cannot exist as a permanent form of government. It can exist only until the voters discover that they can vote themselves largesse from the public treasury. From that moment on, the majority always votes for the candidates promising the most benefits from the public treasury, with the result that every democracy will finally collapse over loose fiscal policy, always followed by a dictatorship.
“The average age of the world’s greatest civilizations has been about 200 years. These nations always progressed through this sequence: from BONDAGE to SPIRITUAL FAITH; from spiritual faith to GREAT COURAGE; from courage to LIBERTY; from liberty to ABUNDANCE; from abundance to SELFISHNESS; from selfishness to COMPLACENCY; from complacency to APATHY; from apathy to DEPENDENCY; from dependency back into BONDAGE.”

What Tytler is telling us is that, up to his time, the idea of freedom was a short-lived experience for any people who were lucky enough to have it. The Athenian Republic of which he spoke, lasted no more than 100 years (some say as little as 50 years).
When the founders of this nation came together to try their hand at the same process that had been tried (and failed) numerous times before, they came with a base of knowledge that was unparalleled by any group before them in the history of the world. They understood what Tytler was teaching his students 3,000 miles away and weaved the rules for long, safe and abundant liberty right into the government plan they gave us.
They called them Auxiliary Precautions.

The Four Foundations of Freedom

These precautions, they said were to hold the nation together once the people stopped following the three primary ingredients of freedom: private virtue, public virtue and wide-spread education (not technical training). It seems that America has already lost the first two virtues and is well on its way to losing character-building education. The Auxiliary Precautions discussed in the Federalist Papers are all that is holding this Republic together — and they are struggling.
What is the answer? Get them back. Live a life of private and public virtue and engage in deep lifelong education. And get your neighbor to do the same thing.
Why does the solution have to been some huge, expensive response? Why can’t we just stop, look around and fix ourselves at home, then help our neighbor and then others in our communities?
We can’t have the fruits of freedom unless keep the roots healthy. Big is usually not better. Stick to the basics. Get a life.

I was shocked, dismayed, and like you I personally grieved for the families who lost children at the Newtown, Connecticut... read more

What The H— Is Wrong With America? – Part Three – The Demise Of The American Middle Class

A Model of Leadership Education, Part 6: An Abundance Mentality

This is an article I published with the Center for Social Leadership back on October 15, 2010. I have re-posted it... read more

I was recently asked if I was happy with the changes in Utah State government (6 more Republicans in the... read more