Over the past 50 years, America has developed the world’s largest consumer culture. You really have to see this. The U.S. has the 3rd largest population in the world following China and India.  But the U.S. also has the 2nd highest rate of consumption (following the oil rich country of the United Arab Emirates), where as China weighs in at 106 out of the top 160 countries globally and India shows up at 116.
Americans are addicted to spending. Financial services companies (primarily credit cards services) spend about $17 billion each year on marketing. That works out to about $54 a person per year. That doesn’t even count marketing of retirement products, college loans, and investment products.
And how much money is spent on financial education in America?  It’s no surprise that it’s less than the amount spent on marketing. As a nation, we spend only about $670 million dollars on financial education, about $2 a person per year. 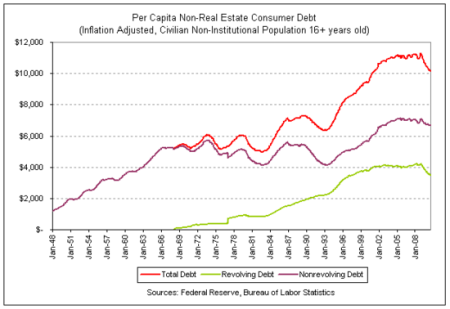 A 2010 ATLANTIC article, How American’s Love Affair with Debt Has Grown, make this point well:

This chart should be startling. It shows that total debt has increased from around $1,186 per person in 1948 to $10,168 in 2010. And remember, that’s using 2010 dollars — and it doesn’t include real estate debt either like mortgages or home equity loans. This debt includes credit cards, auto loans, student loans, personal loans, and other non-real estate consumer debt.

Perhaps an even more interesting observation is the rise of credit card debt. They account for most of the “revolving” debt shown with the green line. It was virtually non-existent until 1970. Now Americans average $3,480 in credit card debt per capita. Since just 1980, that’s an increase of 285%.
What’s worst is that this revolving credit card debt phenomenon has not confined itself to just credit cards. We now treat all of the other kinds of debt, auto loans, personal loans, student loans, etc. as normal components of life, never thinking twice about the consequences.

All this spending has caused us to lose our way. It has blurred the line between needs and wants. One of the primary desired outcomes of a Monticello College education is for our graduates to distinguish and value the difference between fulfilling legitimate needs and identifying and taming unnecessary wants. Especially when fulfilling those wants are the cause of so much debt, divorce, and destruction of relationships. 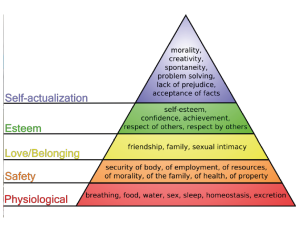 In 1943, psychologist Abraham Maslow proposed a hierarchy of human needs in a paper entitled “A Theory of Human Motivation.” When you look at the chart it is divided into 5 levels. The idea is that you can’t really work on fulfilling one level until you have satisfied the one below it. For example, you can’t real make headway with Love/Belonging until Safety has been established.
It appears to me that in our “ConsumerSphere” we spend virtually all of our time trying to hyper-fulfill the first two levels–allowing ourselves to engage in continuous and lifelong debt, which then becomes a serious impediment to levels 3, 4, and 5.
It is hard to feel good about ourselves and it is hard on relationships when we are concerned about paying bills that never seem to end and which non-payment of actually could put us in jeopardy of losing Safety.
Our goal is to education our students to adopt a more grounded and minimalistic view regarding the needs of clothing, housing, entertainment, and even food.  By not going into debt for these things, they will immediately find themselves in a stable financial situation that tends toward the development  of the Love/Belonging and Esteem levels and gives them a good shot at the positive aspects of Self-Actualization.

A Beginner’s Review of the Qur’an, Part Two: Biblical Terrorism?

Being As Responsible As I Can

I have been thinking a lot about my mortality lately. No, I don’t have any premonitions, but Julia and I... read more

We Are So Grateful!

I want to use this post to thank you for all the help we have received for the past two... read more

By Will Hively The following article is taken from the 1996 November issue of Discover Magazine. We would like to thank Discover... read more