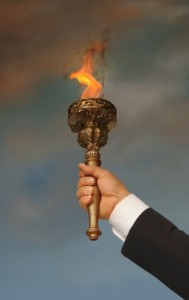 America Is In Crisis.
Some people are immune to the sound of that drum, hearing only a Chicken Little cry of “the sky is falling.”
More, however, are beginning to sense that something really is wrong and want to solve our problems.
Without fail, in every lecture and class I give, the question always comes up: “OK, I believe you. Now what?” or “I already know America is in crisis. So what do we do about it?”
Keep in mind that this inquiry comes after two to four hours of lecture or classroom experience where I was just explaining the solution. So why are they asking me this question?
Is it them or me?
After serious contemplation, I remembered something Dr. Skousen told me once.
Suddenly, it all became clear. What follows is my best attempt to answer my students’ question, “So what do we do about it?”

In Russell Kirk’s Roots of American Order , he spends 500 pages explaining who we are and where we came from. However, for many of us, the essence of these concepts gets lost in the journey.
Allan Bloom’s The Closing of the American Mind and Robert Bork’s The Tempting of America both make the same case:
There is an American Order.
That is what Kirk is really talking about. He is asking the question, “Is there an American way of life that made this country a ‘Light on a Hill,’ ‘A Refuge of the World,’ and ‘The Hope of Humanity?”’
He claims that yes, there is, and that we have forgotten our American Order, the system to employ it, and the responsibility to lead out.
The reasons that this has happened are not mysterious or even hard to understand.
And now that the results of the loss of that order are visible to all; there are political “carpet baggers” who are using our present crisis as a means to enlarge personal power and wealth, all at the cost of individual liberty. (See Federalist Paper 1)
We are told that the solutions to the American Crisis can only be provided at the national level, that the congress and the executive branch are our only hope to tackle these crises, or at the very least that it can only be solved at the national party level.
And mostly, we are told, over and over again, that the American people must have this party or national leadership if these problems are to be solved. Many citizens have accepted this propaganda.
This is reminiscent of the party line of those British Empire supporters who opposed John Adams, Thomas Jefferson, and company in their struggle for the protection of rights and ultimately liberty (See Revolutionary writings of John Adams).

Getting Our Hands Dirty

In a letter to his wife Abigail John Adams once wrote,

Different situations require different focus and preparation, and once a problem has been clearly identified, we then need to establish the best solution to solve that problem.
Often it requires the problem-solvers to try a different path, to stray from the regular, normal approach (which is often broken or not applicable) and create a whole new method to solving the problem.
At the very least it requires an acknowledgment that we — and all other generations — have the responsibility of getting our own hands dirty.
The ancient Chinese philosopher Confucius suggested this as a solution for national
disorder:

Only We Can Solve Our Problems

I agree with Confucius. Ultimately, we as individuals must be the long-term solvers of our problems because we are the creators of our problems.
Yes, I know that many politicians have been or are dishonest, self-serving and corrupt. I also agree that political leaders at all levels often approach their offices from a “Big Government” mentality, and this is also destructive to personal rights and liberty.
I see this in my own little town of 2,000 citizens. But why does this happen? Why does government always expand and grow and take over?
The simple answer is because we allow it. We prefer to let others assume the often boring, monotonous, frustrating, tedious, and stressful work of governance. We prefer to entertain ourselves with an almost nonstop diet of movies, computer games, sports, and other diversions.
Most of us have become so engrossed in the accumulation of wealth or things that we neglect our natural spousal, familial, and even community duties; we prefer to let others dictate and make decisions on all but our most personal issues.
This has gone on for decades. When on extreme occasion, an issue arises (almost always after-the-fact) that pricks us so hard as to wake us from our fog of self-indulgence, we become indignant, angry, and even hostile. We demand change now although every poorly thought out, self-centered solution we offer has little or no substance behind it.
This produces a civic disruption, which generally leads to one of three ends: either a long unproductive and unresolved stalemate—expending huge amounts of energy, a compromise that resolves the immediate concern, but ultimately does not solve the problem, or an eventual collapse back into our miasmic self-indulgence.
When will it be time for us to man up and shoulder our citizen responsibilities? I really don’t mean to offend anyone or point a finger at us, I have been guilty of this apathy myself, but I think that our national, state, and community problems are almost at a point of requiring an intervention.
What happens if we don’t make some serious, long-term changes? In terms of providing solutions, the last elections were mediocre to abysmal.
When are we going to figure out that the system is broken? Party will not save America. The executive branch will not save America. The legislative branch will not save America.

Syncing Our Actions and Values

Back to my discussion with Dr. Skousen. Twenty years ago, in a quiet dinner setting, he related his experience with a coalition of national leaders from South America who had hired him to teach them and help them set up a system of governance that would lead to the affluence evinced in the United States.
He was very excited with the prospects.
He did his due diligence, studied their culture, the prominent religions, and the current system of governance.
He created a proposal to introduce principles of liberty and wealth into their culture that would modify their countries enough to enter the domain of liberty and prosperity.
He said all was going well until the last meeting. He indicated to them that there were a couple of more things that needed to be modified before all of this would work. The leaders gave him their full rapt attention.
He said that as he had prepared to meet with them, he had discovered many beautiful and wonderful aspects of their culture that were very much in tune with the principles he was suggesting and the desired end result they were seeking.
However, there were two common practices that would spoil the apple cart and he was there to suggest that these leaders be the ones to promote the end of such practices if they desired to succeed.
“What practices?” they questioned.
Dr. Skousen very gently pointed out that the practice of having mistresses and the system of corruption that was currently in place were not conducive to liberty and prosperity and would need to end.
Dr. Skousen said that these leaders objected and said that these were part of who they were and that the aristocracy would not stand for such changes. This led to a fairly speedy end of the meeting.
Dr. Skousen got on the plane the next day and a great opportunity to bring unprecedented liberty and prosperity to the average South American was lost.
I am not suggesting that you have a mistress or the equivalent (although if you have one, we probably need to talk). I am suggesting that if we are not happy with the state of the nation or the condition of our city or state, it is likely things are happening that are contrary to principles of liberty and prosperity and that we are out of sync with natural law.
No form of government or set of laws alone can protect liberty, create prosperity, or fulfill the end of man. All of the solutions for our current crisis are in the archives of our bygone American Order.
Our heritage speaks of it. Our ancestors lived by it. If we are to return America to her greatness, if we are to improve our lot and leave a national legacy to our great grandchildren, if America once again is to be that light on a hill, the golden door, the hope of humanity, we will need to search out our American Order and restore it.
To meet this growing need, Monticello College has begun the ReValue America speaking tour and a follow-up extension study program entitled Foundations of Liberty. In the past 12 months, hundreds of Americans, 9-12ers, Tea Partyers, mothers and fathers, college students, and grandparents have enrolled in these programs and are beginning the hard work of becoming New American Founders.
For more info: sb@monticellocollege.org or www.monticellocollege.org

National Defense Authorization Act: Is This The Line In The Sand?

Posse Comitatus... Due Process... Habeas Corpus... What do these all have in common?  Suspension and death, if the National Defense Authorization Act is not vetoed... read more