The Battle of Fort McHenry 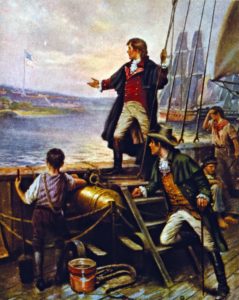 My daughter just sent me a Facebook link to a patriotic video of Pastor Rutherford preaching at the  Shepherd of The Hills Church in California back in 2010.
He passionately tells the story of the origin of the hymn “The Star Spangled Banner,” Francis Scott Key, and the Battle of Baltimore.  His is a moving rendition of history and unfortunately, mostly inaccurate.
I am taking the time to point out these misstatements only to make the point that today with instant access to information, when we embellish a story, we also give the enemies of truth and right the opportunity to discredit the very cause we are trying to promote.
What is even sadder is the fact that the historical account of the Battle of Fort McHenry or the Battle of Baltimore can easily stand on its own two feet and inspire patriotism without embellishment. Expanding the account actually cheapens it.
Inaccuracies
All of the statements below have been pointed out by other writers. Some pointed out these inaccuracies in an effort to discredit the speaker and down play patriotism. Some just wanted to get the story right.
Either way, not being accurate will always do more harm than good.

1.) Pastor Rutherford states that “the colonies were engaged in conflict with the mother country.” Rutherford continuously refers to “the colonies” throughout the video, which reveals very poor chronology on his part. Technically, the “Colonies” had ceased to be colonies since the end of the American Revolutionary War in 1783, some 30 years before the Battle of Baltimore during the War of 1812. 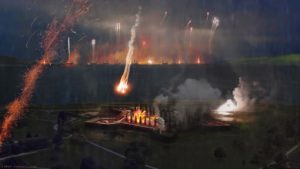 2.) We do not know how many prisoners Key was negotiating for but it is almost certain that it was not an entire ship full. In fact, we only know for sure that he was securing the release of one prisoner, Dr. William Beanes.  From the Library of Congress website:

When the British invaded Washington in 1814, Ross and Cockburn with their staff officers made their headquarters in Upper Marlboro, Md., at the residence of a planter, Dr. William Beanes, whom they subsequently seized as a prisoner. Upon hearing of his friend’s capture, Key resolved to release him, and was aided by President Madison, who ordered that a vessel that had been used as a cartel should be placed at his service, and that John S. Skinner, agent for the exchange of prisoners, should accompany him. Gen. Ross finally consented to Dr. Beanes’s release, but said that the party must be detained during the attack on Baltimore.

3.) Rutherford continuously refers to the fort as “Fort Henry.” It was actually called Fort McHenry.

4.) Rutherford claims that Admiral Alexander Cochrane, who was in command of the British naval forces, informed Key that he was going to reduce Fort McHenry to rubble. This isn’t true. The British had no intention of destroying the fort but instead wanted to capture it.

5.) Contrary to the Rutherford account, there were less than 20 ships involved in the Fort McHenry Bombardment, not hundreds. 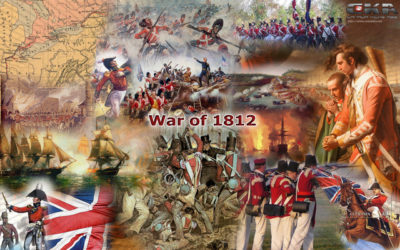 6.) By all accounts there were no women or children in the fort. There was one woman killed in the bombardment but she was not living there. She was simply trying to bring her husband and other men dinner, a case of being in the wrong place at the wrong time.

7.) There is no evidence that men from the fort held the flag up “until they died” and that “the patriot’s bodies” were piled around the flag pole. Fewer than 10 American soldiers were killed in the bombardment.

I am a patriot and a lover of liberty. I support the sharing of the story of freedom. It is a long and rich account of Public Virtue. Human beings sacrificing personal interest for the benefit of others. We don’t have to make stuff up, it’s already in the history books.  Just tell the straight story.

Anyone building a personal library of liberty must include in it a copy of Frédéric Bastiat’s classic essay, “The Law.” First published... read more

A young friend of mine shared her article with me and I thought I would share it with you. Jamisyn Smith was... read more

Do You Know Any Of These Authors and Teachers?

ESTHER EMERY Wow! You have got to take a few minutes and watch this set of videos. Esther Emery and Nick... read more