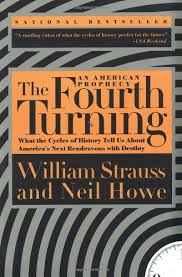 The first half of the 21st Century is a Fourth/First Turning period (See the Fourth Turning by Howe and Strauss).*
This means that the olds ways of doing just about everything are quickly evaporating and being replaced by new ways.
The faster we learn the new ways (or even creating some ourselves) the better for our own personal economy.
One of my mentors from 20 years ago took a class at Stanford in the 1950’s called “Contrary Opinion.”
The point of the class was to show that most people are wrong most of the time. So don’t follow the crowd.
By doing the opposite of what most of the people are doing—especially in the beginning of a period of change— you have a greater chance at success. 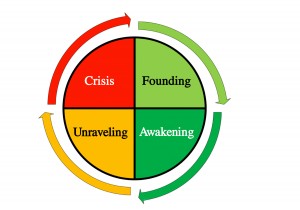 Warren Buffett says it a little differently, he says “be fearful when others are greedy and be greedy when others are fearful,” and Sir John Templeton said, “the best opportunities come in times of maximum pessimism.”
This suggests that we should strive to see what is happening around us from a perspective of curiosity and creativity rather than fear and trepidation.
We should operate and make decisions from a pro-active stance rather an reactive one.
This is how fortunes are made, new technologies created, and the world changed for good.
Unfortunately, most Americans are and will continue to persevere in the old ways which serve only to alienate them from the new reality, making them less and less effective. 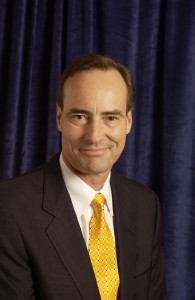 Take for instance the January 2015 report just put out by forecaster and demographer, Harry Dent.
Gauge Your Real Estate Risks: How to Prepare for the Next Crash                January 2015 — Harry Dent, Editor
This is a MUST read.
I have been following Harry Dent for about 10 years.
He offers insight into where our economy is going based primarily on demographics.
Many people will read this report and be scared out of their skins because they will compare it to where we have been, and the economic tragedies of 2001 and 2008; the housing bubble, the near stock market crash, unemployment etc.
But many people have made fortunes over the past 13 years, just like others did during the Great Depression. The real question we should be asking ourselves is how did they do it?**
I struggle with using Facebook and emailing from my I-phone of which I currently am using about 1% of it’s capacity. I still do not understand the value of Twitter, and the host of other social media platforms….but I acknowledge that to effectively communication—at least to get people’s attention—I must master these tools of the 21st century if I plan to be a success over the next few decades.
The same is true about developing financial freedom and in turn maintaining political freedom. The principles remain the same, but the way that we communicate them and apply them are changing, and we must change with them.

**I sent the Dent Report to Strongbrook founder Kris Krohn and President and CEO, Steve Earl.  Below is Steve’s response.
From: Steve Earl <Steve.Earl@strongbrook.com>
Subject: Re: Dent’s Latest Looks Like a Boon for Us
Date:   December 29, 2014 4:48:39 PM MST
To: Shanon Brooks <sb@monticellocollege.org>
Shanon,
Mr. Dent makes some very good points and seems to have some good data to back up his theories.  I agree with most and a little less on others.
Nonetheless, I do believe his thoughts are very accurate in that what he believes the market will do over the coming years gives legitimacy to Strongbrook’s real estate investing strategy, which is two fold.
Number one, we are built on the strategy of creating cash flow through real estate, and because the constant found in real estate is the consistency of rent values, the market can go up or it can go down and the cash flow remains fairly steady.
Number two, when a growth market presents itself, we are able to take advantage of the opportunity, and then move out of it at a strong yet conservative point in the growth cycle.  Additionally, Mr. Dent notes that real estate is very geographic in nature.  Strongbrook has developed its acquisition team to be constantly looking for particular opportunities through out the country and then bring those to its clients.
I agree with Mr. Dent’s thoughts on population growth and how that will affect demand for real estate.  What I don’t know is how accurately things will play out based on his theory.  One thing he doesn’t account for in his hypothesis is the affect immigration may have on US population and demographics.
With the recent change President Obama made to immigration law and how that whole thing may evolve, the US could see a significant increase in population from immigration.  Most of these people are renters, and that will create more demand in the rental market.  Additionally, if these immigrants are granted valid SS#’s, the opportunity for them to get loans and buy homes will impact the single family market and the value of homes.
Having said all of that, if Mr. Dent is 100% right on all accounts, Strongbrook is definitely positioned to help its clients succeed in a very big way over the coming decade.
I hope you all had a great Christmas!  I am looking forward to a huge 2015 and seeing Strongbrook have a significant impact in each of our lives.

A Model of Leadership Education, Part 8: The Campus

The Campus “He believed the sky had a moral function, and that contemplating it induced wonder, a sense of possibility without... read more

The Liberal Arts During Bondage: Part One

[This series of posts are a continuation of the blog posted on January 1, 2013 at Shanonbrooks.com entitled Job Training... read more