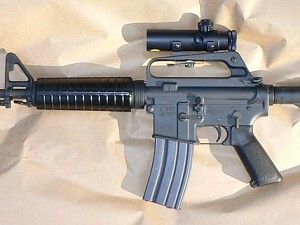 Whether you support it or not, the recent dispute over the Second Amendment has the makings of a serious controversy in coming days.
With the current refusal of as many as 300,000 Connecticut gun owners who legally possess rifles that have just now become illegal in that state, we are witnessing a profound example of civil disobedience.
The amendment in question states:

A well regulated Militia, being necessary to the security of a free State, the right of the people to keep and bear Arms, shall not be infringed.

In the 2008 Supreme Court case of D.C. v Heller, it would seem that this issue had finally been put to bed, but the debate rages on. The final paragraph of the majority opinion of the Court concerning D.C. v Heller delivered by Justice Scalia makes their ruling clear:

We are aware of the problem of handgun violence in this country, and we take seriously the concerns raised by the many amici who believe that prohibition of handgun ownership is a solution. The Constitution leaves the District of Columbia a variety of tools for combating that problem, including some measures regulating handguns, see supra, at 54–55, and n. 26.
But the enshrinement of constitutional rights necessarily takes certain policy choices off the table. These include the absolute prohibit­ion of handguns held and used for self-defense in the home.
Undoubtedly some think that the Second Amendment is outmoded in a society where our standing army is the pride of our Nation, where well-trained police forces provide personal security, and where gun violence is a serious problem. That is perhaps debatable, but what is not debatable is that it is not the role of this Court to pronounce the Second Amendment extinct.
We affirm the judgment of the Court of Appeals.

The American Dream America was established on the hope of relief from political and religious tyranny. Over time it became the... read more

Here is a progress report snapshot on our crowd-funding project with Barnraiser.us that we launched yesterday... In one 24-hour period YOU have provided... read more

The Mission of Monticello College To build men and women of virtue, wisdom, diplomacy and courage who inspire greatness in others... read more

The Boomer and Xer Generation's search for the "quick fix" has done much to cripple the Millennial and Homeland generations,... read more

A Whole New Take on “Selfies”

This post is a reprint from the Inspirational Weekly dated October 6th.  Although the Oxford Dictionary officially made "selfie" a real... read more

15 years ago, I sat in the living room of a female student of mine.  She was a mother of... read more