The Reality of Disruptive Innovation

Are technology and education merging or fighting each other?  This post explores how business development and disruptive innovation impacts education. 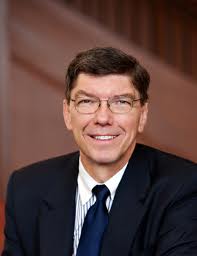 15 years ago Clayton Christensen published a best selling book entitled The Innovator’s Dilemma.
Christensen is considered a leader in the field of business development especially in times of vast technological advancement and improvement.
Christensen explores the phenomenon of why firms fail despite being leaders in their market, willing and able to compete with the best, and capable of continuous innovations within their industry.
He explains the differences between what he calls “sustaining technologies” and “disruptive innovations.”
“Sustaining technological changes” are not the problem for leaders in an industry. Time and time again, they showed their ability to compete in the high end of their market, innovating and at times dealing with radical technological changes.
And because these are sustaining innovations, these improvements are almost always best utilized by the firms that already have a prominent position in an industry.
New businesses attempting to compete by means of these sorts of innovations often fail, because the established firms nearly always have more money, more established relationships with clients, a better reputation, and more technological prowess in the market. According to Christensen, “the leaders of an industry don’t fail because they become passive, arrogant, or risk-averse or because they can’t keep up with the stunning rate of technological change.” 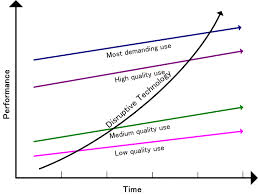 Industry giants only face real trouble when it comes to what are called “disruptive innovations” – these are the changes that topple industry leaders.
These are not radical improvements – quite the contrary, disruptive innovations are usually innovations that are either so inexpensive that they open a new market, or start in a niche that the industry doesn’t care about because it’s too small.
Under the radar disruptive technology often grows faster than users’ needs and with time catches up to and surpasses the more high-end or mainstream technologies that are the domain of industry leaders.
An example that has nothing to do with “high tech” comes from the mechanical excavator industry. This industry was dominated by “steam powered,” “cable driven” mechanical shovels until the 1920’s, when gasoline powered engines began to replace them.
This was, however, not a disruptive innovation but a sustaining one. The design of the machines changed radically from that of a steam-powered engine moving a system of cables, to that of a gasoline engine driving a system to extend and retract the cables connected to the bucket. 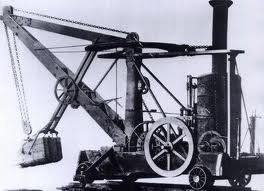 The new engines were more capable than the old ones, and were better at doing more work more reliably, and cheaper than the old system.
But even though the power source changed and the machine design improved, it was still a cable technology driven machine, so despite the radical change in the industry, the same firms that were strongest in steam shovels stayed on top.
The disruptive change came with the introduction of hydraulics after World War II.
The new hydraulic-actuated systems (replacing the network of physical cables)—a change that eliminated nearly all of the established players by about 1970—opened the door for new untried companies willing to take a chance on this new radical technology.
The first hydraulic-based excavators were less capable than the cable systems that were in existence, and certainly couldn’t compete with them. However, they were small enough that they could be deployed for jobs previously done by hand, opening up a new market, in which the desired attributes were quite different from the big jobs that the cable actuated excavators were used for. 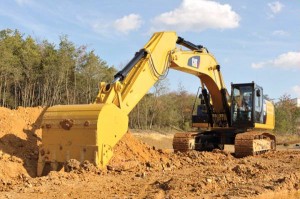 The technology involved in hydraulics continued to improve, however, and with time eventually equaled and then surpassed the needs formerly filled by cable-based systems.
While all of this new innovation was going on, the established firms were still going strong, and didn’t take much notice, if any, of the new technology or the new businesses using it (the newcomers were not considered competition as they could not compete with the big industries existing client base).
Suddenly, so it seemed, (really a period of a decade or two) the new arrivals were “in the midst of the mainstream market.”
By the time the established companies realized what was happening and introduced their own hydraulics it was too late, and the fledging businesses that had appeared to be of no account were better positioned with the new technology.*
Moving from the world of mechanical improvements into our universe of high tech, Clayton Christensen had this to say about disruptive technologies in a March 2013 Wired Magazine interview:
Howe (interviewer): If you had to list some industries right now that are either in a state of disruptive crisis or will be soon, what would they be? 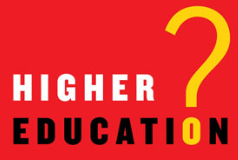 Christensen: Journalism, certainly, and publishing broadly. Anything supported by advertising. That all of this is being disrupted is now beyond question.
And then I think higher education is just on the edge of the crevasse. Generally, universities are doing very well financially, so they don’t feel from the data that their world is going to collapse.
But I think even five years from now these enterprises are going to be in real trouble.
Howe: Why is higher education vulnerable?
Christensen: The availability of online learning. It will take root in its simplest applications, then just get better and better. You know, Harvard Business School doesn’t teach accounting anymore, because there’s a a guy out of BYU whose online accounting course is so good. He is extraordinary, and our accounting faculty, on average, is average.
Howe: What happens to all our institutions of advanced learning?
Christensen: Some will survive. Most will evolve hybrid models, in which universities license some courses from an online provider like Coursera but then provide more-specialized courses in person. Hybrids are actually a principle regardless of industry. If you want to use a new technology in a mainstream existing market, it has to be a hybrid. It’s like the electric car.
If you want to have a viable electric car, you have to ask if there is a market where the customers want a car that won’t go far or fast. The answer is, parents of teenagers would love to put their teens in a car that won’t go far or fast. Little by little, the technology will emerge to take it on longer trips. But if you want to have this new technology employed on the California freeways right now, it has to be a hybrid like a Prius, where you take the best of the old with the best of the new.

Monticello College is certainly not a disruptive technology, nor will we be competing with large universities any time soon. But we are positioned perfectly to take advantage of emerging disruptive technologies and we do occupy a unique niche and employ the hybrid concept creatively.
We believe that just like the bursting of the 2008 real estate bubble, there exists a higher education “tuition” bubble and that over the next five to ten years it will burst creating a real crisis for higher education.  Our business model and academic structure is designed to accommodate these coming changes and provide stability and high quality liberal education for decades to come.
*Thanks to www.squeezedbooks.com