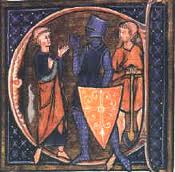 Early Medieval Economics
There are five major expressions of Early Medieval economics:
1. Feudal System*
2. Guild System
3. The power struggle between the church and state
4. The power struggle between the aristocracy and the serfs
5. The early emergence of the merchant class
During the latter period of the Roman Republic, the dominant senatorial class was not allowed to engage in banking or commerce but relied on their latifundia, large plantations, for income. They circumvented this rule through freedmen proxies who sold surplus agricultural goods.
After the decline of the Roman Empire, de-urbanization led to commerce and trade ceasing to exist throughout most of western Europe. Economies became centered around agricultural manors where warrior-landlords, the Medieval nobility, collected rent from their serfs in the form of their produce. Over time this lead to what Belloc terms the Distributive State. This was the dominant economic system until trade began to return in the Late Middle Ages leading to the rise of the merchant class, mercantilism and then capitalism.
The Influence of Aquinas 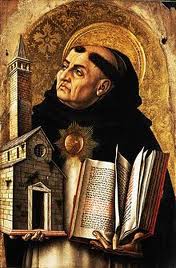 Thomas Aquinas is credited with influencing medieval economics by the return of or at least the serious consideration of three economic keys that seemed to be lost or little used during the end of the Roman Empire and the beginning of the medieval period:
1. Private Property
Aquinas stated that the concept of private property was biblical and a part of the law of nature.  Then he qualified this concept with the philosophy that owners had an obligation to share their possessions with others, while still retains ownership.
He also suggested the propriety of private property being regulated by the government.  And finally, he declared that communal property was reserved for those who wanted to live the life of perfection (clerical or monastery life).
2. He taught that merchants should never charge more than a just price for goods and that a just price was determined by the application of the golden rule.
3. Aquinas believed and promoted the biblical principle that the exercise of usury was a sin.
There Are Six Characteristics of Late Medieval Economics
1. The ruse of the nation state and the rise of oligarchy (and the rise of money taxes)
2. The decline of charity
3. The maturing of guilds and co-operatives
4. The dominance of the doctrine of predestination (as a way to justify                                      leadership which was heretofore unquestioned)
5. The printing press and the revolution of ideas
6. The growth of the merchant class
It is always important to remember the tight relationship between government and money or the economy.  Bastiat taught that all humanity is driven by the same two things: 1) to increase and expand, to gain wealth and 2) to do it at the expense of someone else.
Since all governments consist of people, it’s a good chance these most basic human passions influence government.

The Influence of Bodin
Bodin was a minor philosopher during the historical era that saw the last impulses of the medieval period and the dawn of the Reformation.  He is attributed with introducing two basic concepts:
1. The quantity theory of money (money depreciates when it becomes too abundant)
2. Progressivism (everything tends toward progress)


*Manorialism, otherwise known as the Manorial System, is the political, economic, and social system by which peasants of medieval Europe were made dependent on their land and on their lord derived from the word ‘manor.’ This is also considered the precursor to local mercantilism, national mercantilism and colonial mercantilism.

The Three Most Important Questions

This is the transcript of a short video from Vishen Lakhiani founder of Mindvalley. So the big problem of life in industrialized... read more

The first annual Utah Farm Conference was a raving success. If you didn't go this year, watch for 2018 tickets... read more

In spite of the fact that we live in a world dominated by the extreme credentialism, government regulation and oversight,... read more