Does Anybody Understand This Stuff?: Part 5, Mercantilism and The Physiocrats – A Thumbnail Sketch of 4,000 Years of Economics

A later development of the feudal system, mercantile economics’ primary goal was to develop national and oligarchical wealth through policies that favored minimal imports and maximum exports.
This system dominated Western European economic thought and policies from the sixteenth to the late eighteenth centuries.
Belloc says that this is when Capitalism originated in England, not the result of the Industrial Revolution, but rather already in place to take advantage of the innovation of the age.
The goal of these policies was to achieve a “favorable” balance of trade that would bring gold and silver into the country and also to maintain domestic employment.
This economic system led to Colonial Mercantilism, an easy extension of the feudal system. A strong government would invade another country, colonize it and use its natural resources to build wealth for the mother country.
High tariffs were placed on import trade but the proceeds were funneled to the mother country, not the colony.  The mother country would also force free trade policies on the colony for any trade goods passing from the colony to the mother country.
In addition to receiving the bulk of the proceeds from the excessive tariffs  forced on the colonies, the mother country demanded and usually received ever increasing taxation.  These colonization policies normally resulted in revolution or intense military occupation.
Physiocrats
Physiocracy (from the Greek for “Government of Nature” – Physio = Natural – Crat = rule or Rule of Nature or Natural Law) is an economic theory developed by the Physiocrats, a group of economists who believed that the wealth of nations was derived solely from the value of “land agriculture” or “land development.” Their theories originated in France and were most popular during the second half of the 18th century.
The movement was particularly dominated by François Quesnay and Anne-Robert-Jacques Turgot.  The most significant contribution of the Physiocrats was their emphasis on productive work as the source of national wealth. This is in contrast to earlier schools, in particular mercantilism, which often focused on the ruler’s wealth, accumulation of gold, or the balance of trade.

As with most philosophies, there usually is a great difference between theory and practice.
Many of the key points of this economic philosophy seem to contradict each other, especially when applied by others and when given the force of law. Some would say that it contributed to the chaos of the French Revolution:
1. They rejected mercantilist focus on foreign trade.  Focused on controlling domestic economy through farming mostly.  Anything that was not domestic and /or agriculturally based was considered of secondary importance.
2. They believed that statutory laws should seek to be in line with natural laws.  They took the mechanistic worldview of Isaac Newton to the study of the social production and distribution of goods and services.
3. They believed real wealth comes from agriculture.  Workshops and Industrial Plants only promote wealth secondarily.
4. They were not against mercantilism per se but against the regulatory nature of mercantilistic governments. The following outline covers the basic mind set:
A.) The natural tendency of mercantilism is to produce wealth. The theory of mercantilism left to its own devices would increase the wealth of a nation.  The problem lies in the excesses of government oversight.
B.) The natural tendency of merchants is to serve their self-interest, and in pursuing their self-interest everyone benefits from the excess wealth they create.
C.) Mercantilism naturally results in increasing the productivity of labor.
D.) Government interference in mercantilism—through taxes, regulations, price controls—hinders the activities of merchants and so prevents these natural laws of economics to take place.
E.) The benefits—increased wealth, increased productivity—will rarely be realized if government regulation is allowed.  They saw the application of mercantilism in their time as manufacturing (secondary), International (non-domestic and so, secondary) and fraught with government regulations that slowed the natural process of the market. 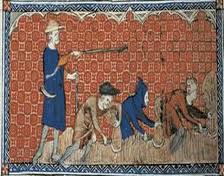 5. They opposed the Corvee (forced and unpaid manual labor by peasants)
6. They introduced the scientific method to economics (created a study of the flow of labor and wealth and the regularities of the market—and in so doing really helped to set the stage and vocabulary for Adam Smith).
7. They promoted:

On the face of it, many of the ideas and concepts of the Physiocrats had great merit.  But their application was very contradictory and inconsistent. They wanted to combine absolute monarch, private property, protectionism, and laissez faire.  And force it all to work with government intervention.
The French Revolution of 1789-94 was at least partly a result of these policies which sounded to good to be true (which means they are almost always not true), but actually backfired because of a lack of proper governmental protection for the masses and because of corruption in the government and the moneyed aristocracy.

The Reality of Disruptive Innovation

Are technology and education merging or fighting each other?  This post explores how business development and disruptive innovation impacts education. 15... read more

In my 2019 book AMERICAN:Killing the American Dream, I stated on page 210, that the national debt was at least... read more

I am always experimenting with the growing season here. I want to know first hand just what the limits of... read more

[This is the transcript of a lecture I am preparing to give around the country. If you are in Las... read more

A liberal arts education is your key to unlock the door of living for fulfillment, not just money. But can... read more