World Reserve Currency: Do You Know What It Is And How It Affects Your Family?

A foreign currency held by central banks and other major financial institutions as a means to pay off international debt obligations, or to influence their domestic exchange rate. A large percentage of commodities, such as gold and oil, are usually priced in the reserve currency, causing other countries to hold this currency to pay for these goods. Holding currency reserves, therefore, minimizes exchange rate risk, as the purchasing nation will not have to exchange their currency for the current reserve currency in order to make the purchase.

Today, the World Reserve Currency (WRC) is the US dollar. This means that all oil, for example is priced in US dollars, or that to buy crude oil (used to create gasoline, heating oil, plastics, etc.) a country must have a “reserve” of the WCR to make the purchase and assure the ability to make purchases in the future.

So naturally, any country that wants to protect itself against changes in that currency and to ensure its ability to purchase needed crude oil for the foreseeable future (in this example), will hold as many US dollars as it can to meet its long term projected needs.


Except, what happens when the there is a shift in World Reserve Currency, and the US dollar looses its WRC status?  What would all of the countries who hold US currency do with their dollars? And where will those dollars end up?
A shift away from the US dollar as WRC has been discussed for at least the past decade. An actual shift began just two years ago with currency agreements between Russia and China and China and Australia and the ongoing negotiations of BRICS (Brazil, Russia, India, China, and South Africa).  This has little impact at the moment, but it indicates a willingness on the part of these countries and others to side-step WRC and discuss changes for the future. 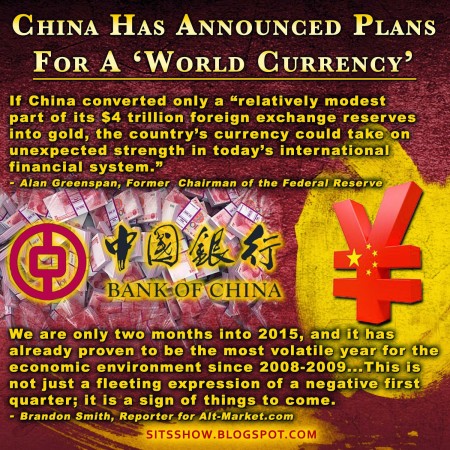 That future is now, as China devalued its currency just 3 days ago (August 11) in another move to create a wedge between the yuan (or Renminbi or RMB) and the current WRC (US dollar).
With the American debt load we bear, it is only a matter of time before the WRC shifts completely and we witness a huge influx of US dollars that will trigger massive inflation.
Things To Do To Weather The Inevitable:
1. Move investments out of the dollar.
2. Develop a large inventory of regularly used household items (6 months to a year is recommended) and then rotate your stock, using the older items while continually adding new.
3. Find ways to reduce your tax burden (taxes will rise).
4. Reduce consumer debt load as much as possible, fixed mortgage is ok.
5. Develop multiply streams of income, do not depend on a single stream.
See the following past blogs for more ideas:
The Servile State: The Scourge of Economic Slavery
What Ar eThe Georgics, Really?
Attention Span: Our National Education Crisis
The Death Of Free Enterprise
Fourth Turning – Skies Darkening
Return Of The Manual Arts

P.S. There Are None So Blind As Those Who Will Not See  – John Heywood 1546
I do not know how long this link will be good, and they want to sell you gold at the end but the meat of this 20 minute video is relevant and worth watching.   Meltdown America

Prepping For The 4th of July

(As I was preparing to send you the text below, I opened an email this morning from my daughter Ginnie... read more

Godin NAILED IT!! I have been promoting these ideas for the last 20 years. I hated school and was very much... read more

In 1951, Mortimer Adler wrote a insightful essay on education entitled, Labor, Leisure, and Liberal Education. I have included a short... read more

I am super stoked to introduce you to our newest faculty members Amy Choate and Josh Choate. A perusal of Amy’s... read more